>Time for the next set of books on my Father Christmas list… oops, I mean my recommendations for your gift buying…


looks around to see if anyone has noticed…

*********
Poking a gentle stick in the eye of traditional fantasy, “The Unwise Woman of Fuggis Mire” by Raven Dane, is a hilarious romp around the stereotypes.
Morven, the Unwise Woman of Fuggis Mire, is the on duty seer.  She’s been on duty since Angharad, the Extremely Knowledgeable Unless it was Questions about the Weather, retired from the trade to go and live with her sister.  Then the feast of St. Epiligia, patron saint of pointless journeys and voles dawns and Morven finds herself inundated with pilgrims.  Demonica, daughter of the ruler of distant Darkness and Despair, is bored and looking to cause some hellish Havoc. Can Morven assemble a team to stop her?
“The Unwise Woman of Fuggis Mire” is one of the funniest books I have read recently. Its gentle satiric humour and stunning writing remind me of Tom Holt and Terry Pratchett. Suitable for adults and older teenagers, this is one book that is on my Christmas wish list… um, I mean, my highly recommended gift choice list… 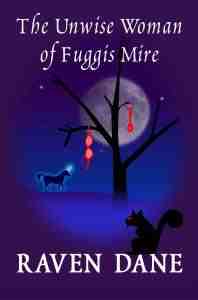 Available in Print from Endaxi Press
http://www.endaxipress.com/?P=12
*********
Do you like Dragons? There have been plenty of films and books about dragons recently (How to Train your Dragon immediately pops into mind) but none of them are quite like “Dragon Academy” by Diane Nelson.
The last greywings on the planet have been sent to New Jersey, along with Nick in an effort to conserve them. Nick has to contend with the other trainers Keith and Maxie as well as the female students of his aunt and uncle’s riding academy, not to mention the overwhelming egos of the dragons themselves. Nikita and Michael are not going to make things easy.
Diane has a smooth writing style that blends fantasy and reality into a believable story. By the end of Chapter One, you really do believe that dragons exist and are flying around the countryside.  Dialogue, descriptions, and humour all bound into the story making it highly entertaining, funny and action packed.
“Dragon Academy” would make a great film. It would also make a wonderful present for anyone who likes Harry Potter or Eragon… like me… Did I say that out loud?

Available in Digital Format at ireadiwrite Publishing and Amazon. Soon to be available in Print
http://www.ireadiwrite.com/Dragon-Academy.html
http://www.amazon.com/Dragon-Academy-ebook/dp/B003STD9XU/ref=sr_1_1?ie=UTF8&m=AG56TWVU5XWC2&s=digital-text&qid=1291165190&sr=1-1
*********
Matty and the Computer Crooks by Annabelle Page is a wonderfully fun book that makes the reader feel that you are really there with Matty and his friends, as they work their way through the adventure that ensues after Matty overhears two crooks discussing how to steal the computer’s from Matty’s school.
Aimed at children from the ages of seven and up, Annabelle’s writing style doesn’t talk down to kids, but “Matty and the Computer Crooks” is easy to read and highly enjoyable. A perfect present to encourage your younger gift receivers to read!

Available in Print from Endaxi Press
http://www.endaxipress.com/?P=15
*********
Well, that’s the end of part two… part three will be around later I should imagine… Toodles!