Today is sunny, with a little wind, but because it’s a Monday, it means I won’t see TOH and the children until after school. To be honest, I’m rather glad of it. Not because I don’t like my kids or my partner, but because after a weekend full of them, it’s nice to have some peace and quiet!

And that’ll change soon enough… so I’m making the most of it while I can.

I thought today, I would introduce you to my family. I think I posted about them before, but I can’t remember when, so it’s been long enough that I have new friends to introduce them to.

We’ll start at the top of the Pile: The Cats. 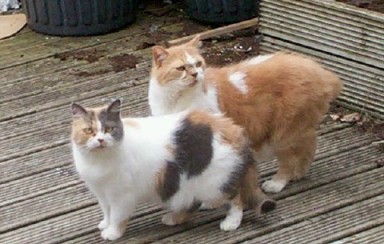 Yes, I am a cat slave. The pair in the picture are brother and sister – the orange and white one is Gizmo and the tricolour is Cleo.

Gizmo is named after the adorable character in Gremlins because when he was a kitten, he had huge ears and paws, was the fluffiest thing I had ever seen and loved to eat. It’s the eating that got him to the size he is now (massive) and almost cost him his life (he had urinary tract problems a year ago and was in pet hospital for nine days)… not that that has put him off eating – he’ll eat anything and everything, including cardboard and plastic.

His favourite place to sit is on me, snuggled up under my hair. When he was a kitten he used to sit on my shoulder, actually under my hair, and he thinks he can still do it… I don’t have the heart to tell him that he’s too big to do that any more! I am his human, despite the fact that I got him for TOH.

Cleo is his smaller (but no less fluffy) full blood sister. We rescued her from her last owner who was using her as a kitten factory in a bid to make some money.  She came to us already pregnant and eventually had five kittens… they were rehomed together as a family, and Cleo stayed with us.  We think she’s been mistreated a little, because she is incredibly skittish and runs away from the slightest hint of danger (she even runs when there is no danger!)

Cleo’s favourite places to sit include on the front room curtain, on top of whatever clean washing she can manage, and on the loose material of TOH’s favourite lounging-around-in trousers. Like her namesake, she is beautiful and very demanding when she wants something. She is also very picky about the state of the litterbox; if it is not up to her standard she will find somewhere else to do her business… and as she shares it with Gizmo, that happens about twice a week if TOH doesn’t sort it out first.

Yes, I know we are supposed to have separate litter boxes for them. we tried it and it doesn’t work. Gizmo used whichever one he fancied, so we had twice the problem.  You’re also supposed to have separate food bowls for them; we tried it… Fatcat just ate all his food before Cleo could finish hers, then when she wandered away (she’s a grazer) ate the rest of her food as well.

Okay then, from my Master and Mistress, we shall move on to… * drum-roll*

TOH (aka The Other Half )

Yes, he has a name, but I am not allowed to use it upon the inter-web. So get used to the acronym. This is he: 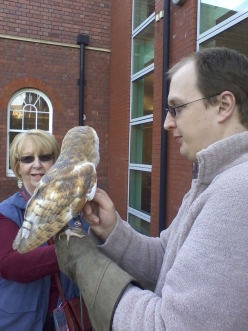 TOH is an artist with all that goes with it – the mess, the tantrums and the up-and-down enthusiasm for his chosen profession. He was originally a Civil Engineer / Hydrologist, but after a series of job losses to do with his dyslexia and the economy  he decided to return to his one true love (no, not me, I’m second fiddle to this) – Drawing / Painting / Animation / Manga and Comics / Console Games; aka ART in all it’s myriad guises.

Just recently he’s become excited about ceramics. *rolls eyes* I foresee an awful lot of mess coming from this one…

NOS (aka Number One Son)

Unfortunately he’s managed to avoid being photographed  since then – and he’s changed so much! In this photo you see a cherubic, sweet, well mannered ten year old. He’s not like that any more – he’s 12. NOS has entered that scary time for all parents, the pre-teen years and is currently experiencing the joys of High  School and having his very first girlfriend (all together now – Ahhh).

What this actually means is that I have a confused man/child on my hands. He still likes cartoons, Pokemon and stuffed toys (I’m surprised he can actually fit into his bed with the number of toys he has on it still), but he also likes ‘Sexy ladies’ (his term), Top Gear and action movies. He’s also now the same height as me, which can make it difficult to discipline him,  as he is practising his ‘looming’ a lot. I know his ticklish spots though…

Last, but very much not least…

PT (aka The Princess Terrorist)

Getting a picture of PT is easy – I just point a camera at her. Here’s the latest one: 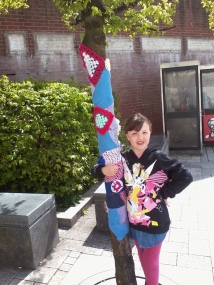 She’s not so much the sweet, cute little girl any more (she was really cute when she was a baby, but don’t tell her I said that) mostly because she’s growing far too fast; you can practically see her grow overnight! She’s up to my chin and accelerating…

PT likes to dance and sing and be the centre of attention. In fact, she loves it so much that she’s done a video about our back garden for my blog… I have yet to edit it together, but as soon as I have, she’ll be appearing on your screens. PT is a diva in all things. She has to have her own way so much that it’s getting tiring saying “No.”
Having said that, she can also be very sweet and loving. She tells us that she loves us half a dozen times a day or more, is always up for a cuddle (despite being too big for my lap) and will do anything to make you happy when you are sad.

So that’s my family. I love them all and they support me in whatever I do. My children help me write books for other children,  read the ones I’ve written and generally make up my cheerleading squad. TOH provides emotional support and idea bouncing and the cats are very happy to keep me company while I write…

Look out world, here I come…

The first book in the Tower and the Eye series is available, exclusively from Pfoxchase (An Imprint of Pfoxmoor Publishing) – all those creatures I’ve been telling you about? They’re in this book! 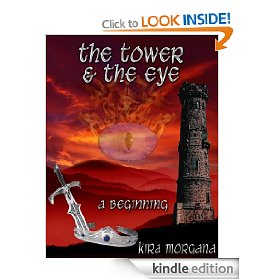 Be prepared for anything, for the Overlord sleeps no more…

… and I’m not joking either.

Today’s Monster Monday is all about Skeletons.

Don’t worry, I’m not bringing one in here – there are just too many types and the reanimation magic used on their remains keeps them close to their home dungeon.

So I’ll just tell you about them…

The first type of Skeleton Guard is the Standard Skeleton. These can be reanimated with a minimum of effort by the newest of warlocks, from any age of bone and normal raised from the graveyards of peasant stock from the Overworlds.

Standard Skeletons can then be trained in the same way as other creatures, through sparring and battles with other creatures. This type of skeleton isn’t particularly intelligent, requiring careful supervision, especially around Hell Hounds and Blood Wolves.

The animals will do what any canine likes to do and steal bones from the skeletons, either gnawing them into splinters to keep their teeth sharp or burying them in out of the way spots to save for later, which can me disastrous just before a battle or skirmish.

The next level of Skeleton is one raised from an enemy creature. These Eneletons are considered the Officers of Standard Skeletons, being created from already trained creatures during incarceration in the dungeon’s Holding Cell

Dark Mistresses are responsible for the full creation of Eneletons, as many will attempt to return to their previous masters. They must be carefully reconditioned to their fate before being allowed to train and draw pay in the Skeleton Guard.

The final level of Skeleton is that raised from the incarceration, torture and defection of a hero of any class. They keep their skill levels and require no reconditioning once they have been accepted by the crystal. These Heletons are the elite of the Skeleton Guard, often undertaking dangerous, secret missions, when they aren’t running the Skeleton Guard in te ranks of the upper Officers.

It is safe to say that the Skeleton Guard is truly the Backbone… thigh bone, skull, jaw… of a competent Dungeon Custodian’s forces!

*groans are heard from the audience*

I’ll take that as a compliment!