As a writer of Fantasy, Science Fiction and Horror stories, I allow my imagination to come alive. I pride myself on making sure that my work is as cinematic as possible…

Hang on. Cinematic… what does that mean?

Let’s take a quick trip to the dictionary; just to make sure I’m using it in the right context:

So.  what I am trying to say when I use the word Cinematic, is that I attempt to show through words the pictures that I am seeing in my head as I write. I try to make sure that my descriptions of characters and places draw the reader into the story.
What has this got to do with the VFX Protest?
First, I need to sum up why the VFX industry is protesting.
While life is hard for a lot of people; the economy is down, no one has a lot of money, we’re all feeling the pinch etc, for those of us who try to make a living as a creative person, that’s normal.
Everyone in the world wants  books,  posters, pictures, magazines, comics, films, music, jewellery, clothes, cushions…- all the little things that brighten our day and make us feel a little better about our circumstances – and they want them as cheaply as possible, mostly because they don’t have a lot of money to spend on them.
Now I could rant about this all day and it wouldn’t solve anything.  This is supposed to be about the VFX Industry Protest after all.
Like everyone else, the VFX Industry is having financial problems. Several VFX houses have had to close down, putting people out of work. They do the work of gods (ie: creating worlds and creatures where there once were none) for as little as  the studios that hire them can get away for paying them. And while the film that they work on may go on to be a massive blockbusting hit, bringing millions of pounds in ticket sales to the studios, because they work for a fixed fee, the VFX Houses see virtually none of that profit.
What they are protesting about is the system they are forced to work in and they want to do something about it.  Fair enough say I and probably many of you will agree with me,  that their protest is a fair one.
However, the protest is being kept under wraps by all sorts of people who really ought to know better… and this was the straw that broke the VFX Camel’s Back – go on, I’ll wait for you to watch the video and come back:
http://www.huffingtonpost.com/2013/02/24/jaws-oscars-life-of-pi-_n_2756380.html?utm_hp_ref=tw
While the Oscars was going on, the VFX community were picketing outside. Everyone else on the oscars got a decent amount of time to do their acceptance speech, but when the Life of Pi VFX team were picking theirs up, they got cut off barely 43 seconds after being handed the award.

That’s all very well, you say, but that doesn’t me anything to me, I don’t work as a VFX Artist and neither do you… well it should mean something.  Lets look at this in the most basic level. What would Life of Pi look like without VFX? 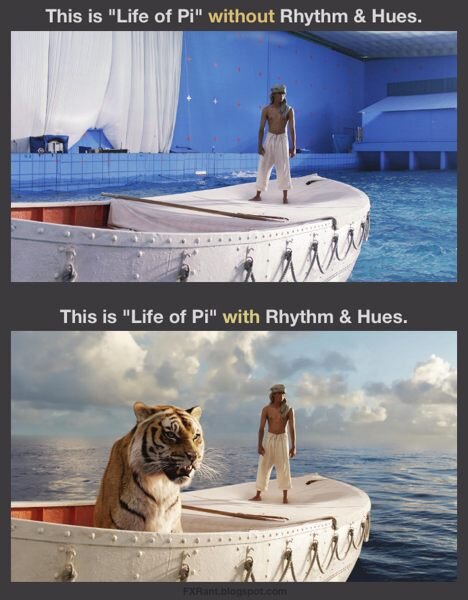 Essentially, without the VFX that makes the film so beautiful to watch, it wouldn’t be as ground breaking. It’s not just Life of Pi though. Without VFX, films like Avatar and the Avengers would be just people in costumes and paint… nowhere near as engaging.

Okay, you say. I can see that. But why are you getting worked up about it?

As I said, I’m a Fantasy/SF/Horror writer. I rely on my imagination and my skill with words to communicate what I see to my readers. But should those words be popular with enough people, some studio might say “Let’s turn this into a movie.” and that movie will be dependent on the VFX industry to bring it to life.

So yes, this problem will affect me personally in a slight fashion… and no, I don’t have any movie rights contracts up my sleeve.

Also, my fiance is heading into the world of animation and illustration – he’d love to work for the very industry that is having problems… The thing is, this protest and a similar one by screenwriters a few years back, are symptoms of a larger problem that I touched on earlier.

Everyone is having money problems. So those people in the position to spend money want to get what they need as cheaply as possible, and that creates the problem. Instead of paying artists/writers/animators etc, what their skills are worth in real terms, they negotiate it so that the artist at the bottom end of the chain (the one producing the effect) is getting paid pennies.

I touched on this myself when I tried to explain why I set my e-book prices the way I do… essentially I give myself a living wage, which in britain is the minimum wage of £5.40 (according to the govt) and work out how long it took me to write the book, multiply that by the minimum wage… gasp, have a heart attack and cut it from a couple of thousand to a reasonable figure that I could expect a reader to pay. It takes me longer to make money that way, but believe me, a price of £4.99 for a novel is better than one of approx. £5,000.

And that’s what the VFX houses have to do. They figure in their technology and software of course, but paying the artists who do the work and the technicians that do the coding is the biggest part of their price. Of course, they have to figure in overheads like energy and rent as well… if I did that, I wouldn’t be paying myself anything at all…

Everyone complains about their wages, but when you’re on the breadline and worrying about the food coming in, having to worry about your job as well… well, we can all understand that.

7-writers get to strut their stuff (The Seven Line Challenge)

The talented Mary Ann Bernal has tagged me into the 7-writers challenge…
http://maryannbernal.blogspot.co.uk/2013/01/7-writer-challenge.html#.UPAONh003Tp
Well, never let it be said that I shy away from a writing challenge!
This is your mission:

Go to line 7 on either page 7 or page 77 of your manuscript and do a post with the next 7 lines, then tag 7 people to keep the challenge going.

*This a short and savvy way to see what others out there in the blogosphere are writing.

Well here we go.  Here are my seven lines from my WIP – Book #3 of The Secret of Arking Down Series; The Second Door.
The Daemons from the Fire Realm are confronted by Hades, Lord of The Underworld…
* * *

“I have been sent by my Master to retrieve the Shield, Lord Hades.” Lady Deumara curtseyed. “These others are merely my bodyguards.”

Nex rolled her eyes. “She says that as if we weren’t able to hear.”

“Well that is why we were sent with her.” Morbus gave a tiny whimper as he looked up at the full daemon.

Lady Deumara absently patted him on the head and Morbus wagged his tail.

I’m going to pass this challenge on to…