The Land Far Away is a series that is very close to my heart. It’s gentle, full of adventure and fun, but the stories always seem to have a meaning. However, the reasons that LFA is special to me are manifold…

Firstly is this character’s story –

Pika the Phluph and The Gribblebid Tough was the first children’s book that I ever wrote and it’s the one that brought Maria K and I together. I’d been messing around with nonsense rhymes and she started drawing some of the characters from the post they appeared on. I loved her drawing style, so asked her if she wanted to collaborate. The collaboration turned into a long distance friendship – she and I have a lot in common!

Then of course, Pika the Phluph herself was created by my oldest daughter when she had just started school – she was struggling with the whole “PH” is “FF” sound and I wrote part of the story to show her what it meant – I drew a sketch of the character to show her that Pika was “fluffy” and that it could also be spelt “Phluphy”. I just continued writing about Pika because she was so cute (like my daughter at the time) and I’d been bitten by the rhyming story bug.

The next few books followed rapidly. Rhyming stories can be very hard to get right, so it took a while to get them right. Maria would sketch up the stories as I did them (I owe her several boxes of colouring pencils at the very least) and then format and publish them (it’s easier if she does that end because she has the scans of the pictures in the right DPI) – that segued into producing e-books of them and finally finding Trista Shaye  to voice them in the audio books.

And that pretty much brings me up to date with the latest Land Far Away news!!

Last christmas I bought a cute little (singing) reindeer that I named Rosie. I had intended her to be a part of my Satyulemas Decorations, but PW jumped on her and immediately wore out the singing part of her!

Once I’d rescued her from PW, I sat her in with the rest of my collection of Stuffies and thought about her… next thing I know, I’m writing another Land Far Away rhyming story. It had been a long while since I’d managed to start one and actually finish it, but Rosie’s story just flowed out of my mind onto the screen in front of me…

A quick edit and polish later and I passed it to Maria.

She just published it… YAY! It’s currently only available in Print format, but knowing Maria, the e-book and Audiobook formats won’t be all that far behind!

So here is the latest of the Land Far Away stories – 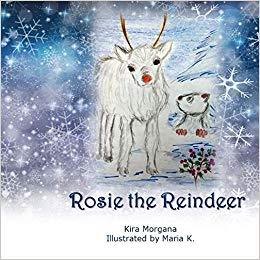 Another Christmas comes to Land Far Away, and with it – a new set of troubles and adventures.

Rosie is a cute little Reindeer Calf, doing what Reindeer Calves love to do; eating Lichen and playing in the snow.

Unfortunately, playing in the snow is what gets her in trouble and it’s up to Quinza the Linzer to find and rescue her from the snowy wastes of Linzerland…

Available now in Print from Amazon:

This was the month that The Tower and The Eye: A Beginning finally made it back onto the market!
It took me quite a while to get the story to how I wanted it and it wouldn’t have made it had it not been for the wonderful people in my Beta Reading Group, my two patrons and an Editor friend…
I’ve made a start on the re-write of Book Two – A Party at Castle Grof – and have also written a short story that will be put into the Quargard Chronicles. I’m in the middle of a second story for QC as well. Hopefully that one will be finished by the end of the week…

But because I love all my fans, I’m going to post the first short story in my Fan Group on Facebook for you to read! If you’re a Patron then you already have access to the new story on my patreon page and in the group. If you haven’t joined the Fan Group already, then just request an invite.

I’ve also been working on a couple of Land Far Away projects, one for the Sketchbook Project and one of my WIP’s, currently titled “Fingle and Springle” (That’ll change when I get to the other end of it!) so I’ve been working on my poetry writing… it was this that inspired me to take part in a Poetry competition.

I wasn’t expecting to win anything – Poetry isn’t really my thing. I tend to stick to rhyming couplets and I don’t pay much attention to the meter or any of the technical aspects that true Poets agonise over.
The challenge was this:

This week you are asked to produce a Cinquain.

The cinquain, also known as a quintain or quintet, is a poem or stanza composed of five lines.
Examples of cinquains can be found in many European languages, and the origin of the form dates back to medieval French poetry. The most common cinquains in English follow a rhyme scheme of ababb, abaab or abccb.

and the Subject was Regret… so I had a go.  This was the result.

As Summer comes to a graceful end,
Children prepare for the return to school,
Parents breathe out relief as they send;
Their offspring back to education’s rule,
Hoping that they don’t look the fool.

Teachers sigh for the freedom of Summer,
With no alarm clock ringing out the hour,
Laden down with lesson planned mummer,
Hoping that their students haven’t got dumber,
And that their efforts will show fruit and flower.

I don’t think I did to badly on the form, but I didn’t get the feel of Regret I was looking for! As I predicted I didn’t get even a single vote, but that doesn’t matter much to me. It was the challenge to my writing abilities that I did it for and it was definitely a challenge!

Next Month is the run up to NaNoWriMo. I’m still not certain exactly what I’ll be working on for it, so watch this space!

Well, the rewrite of “A Beginning” has not only been completed, but is also published and available to buy again!
There’s a sneak peek from the second book in the end matter as well as the rewritten main story, so I’ve tried to pack a lot into a little book…

The rewrite of Book 2 – “A Party at Castle Grof” is underway, as is the writing of “The Quargard Chronicles” (as mentioned in my last post) – a collection of stories and poetry based in the world of Quargard. That’s going to take me a while to put together, but hopefully it will have illustrations as well.

I’m also planning a limited edition hardback of twenty of each of the series books. The first ten of “A Beginning” will be numbered and will only available as a Goal on My Patreon Page, as a thank you to anyone who chooses to support me.
Again, this edition will have illustrations and maps of the dungeon that the book takes place in, and will take me a while to put together, so keep your eyes peeled!

I’d better get on and write now… before my kids interrupt me again!

together we can solve tomorrow